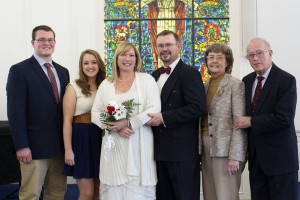 Rev. Steve DeLisle was born in Kenya, East Africa to missionary parents. When the family returned to the states, they lived in Nebraska where Steve grew up on a cattle ranch. He graduated from Anderson University in 1987 with a BA in History and minors in Political Science and Drama. He was a Justice on the AU Student Government Court and was Chief Justice during his senior year.

After graduation Steve worked in professional theater, retail sales and customer service. In 1989, he felt God calling him to the ministry and returned to Anderson University. In 1992, Steve graduated from the AU School of Theology with a Master of Divinity degree.

Steve became pastor at Maple Grove in November 2013. He lives in Muncie, IN with his wife, Tina.